On Thursday 15th February, the Muslim Council of Britain held a press conference with the Al-Manaar Centre (MCHC) in Kensington.

The press conference was held to provide information and an update on the national Visit My Mosque Day initiative and how other mosques across the UK are also positively shaping the future of their local communities for the better, such as Al Manaar. 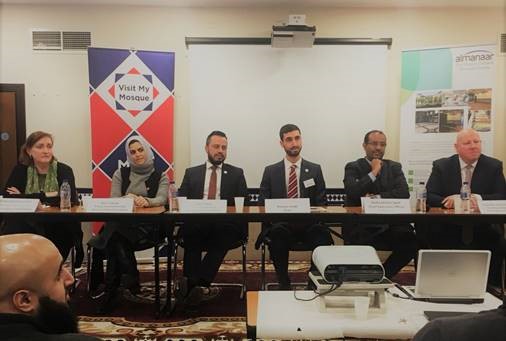 You can read the Secretary General’s full speech at the press conference here, or read below:

Salaamu Alaykum, Peace be with you

Thank you all for being here today. My gratitude goes out to Al-Manaar Mosque and the CEO Abdul Rahman Sayed for hosting this press conference today.

Visit My Mosque is a national initiative which the Muslim Council of Britain (MCB) has been facilitating since 2015, building upon the vast array of mosques in Britain – including this one – that have been organizing open door events for years, if not decades.

Visit My Mosque is an initiative which is grassroots in nature, organised by hundreds of Muslim volunteers across the UK, young and old, male and female, of all ethnic backgrounds. Starting off with 20 mosques in 2015, the initiative has grown in popularity, with 80 and 150 mosques taking part in subsequent years.

Last February with the US President Donald Trump’s so-called ‘Muslim Ban’ announced, tens of thousands of Britons flocked to their nearest participating mosque to show their support and solidarity. And following this, the Speaker of the House of Commons, Rt Hon John Bercow MP, invited the MCB to host an event at Speaker’s House to recognise the achievements of the volunteers from the 150 mosques that took part which took place in September

This Sunday 18th February, we are pleased to announce that over 200 mosques nationwide have answered the call once again, and will be opening up their doors to their local communities of all faiths and none.

And this is very much the theme behind this year’s #VisitMyMosque day:

Many mosques have open door policies yet, a recent YouGov poll commissioned by the MCB found that a staggering 90% of Britons have not visited a mosque in recent years.

Yet, mosques are more open than ever before. We heard at last month’s Our Mosques Our Future conference organised by the MCB – that brought together 400 mosque leaders and activists from across the UK – how much mosques are regularly making a positive difference to their local communities be it from organising food donation drives, to food banks, to local street cleans, to free health screening and support services, to soup kitchens for the homeless and much more. And of course as we know today – being here at Al-Manaar Mosque – to also responding incredibly quickly to victims of the Grenfell Tower tragedy last summer.

In addition to 90% of Britons having not been to a mosque, 1 in 4 of Britons surveyed said they did not know a Muslim. These figures are shocking and the MCB believes that the perfect way to change these is through events like this weekend at #VisitMyMosque days up and down the UK, where Muslim communities are going out of their way to let their local communities know that everyone is welcome and that their doors are open.

Finally, the YouGov poll also found that almost 70% of Britons had not seen the inside of another faith’s place of worship at all, be it a Church, Mosque, Syangogue or Gurdwara etc and this is surely not good for social cohesion. This figure is naturally lower for multi-cultural and multi-religious London at about 50%, but higher in the rest of the country and we feel in a time of increasing intolerance and rising misunderstanding of faith communities, all places of worship should consider having an open day at least once a year.

Finally to wrap up, mosques are part and parcel of the fabric of British society – a fact that shone through at last month’s Our Mosques Our Future conference and one that we will continue to promote – ever since the first mosque in the UK was established in 1889, almost 130 years ago.

Incidentally, the first mosque here in London, opening slightly later in 1895, is just down the road from here in Albert Street, Camden, NW1. It was founded by Hajji Mohammed Dollie who arrived to the UK with his wife and two children from South Africa, and seeing the lack of services, offered up a room in his house to the local community as a mosque.

Hajji Mohammed Dollie’s last surviving grandchild, Haj Kulsum, aged 93 years old, passed away this week in Cape Town, South Africa. However mosque leaders up and down the UK are continuing to tread in this family’s path by opening up their doors to anyone in need of help, to benefit from support services, or who simply want a cup of tea and a friendly chat.

Members of the public can find their local mosque online at www.visitmymosque.org/find

We hope this Sunday – with over 200 mosques and communities opening their doors – that Visit My Mosque Day 2018 will be a small step towards greater community cohesion in Britain today.