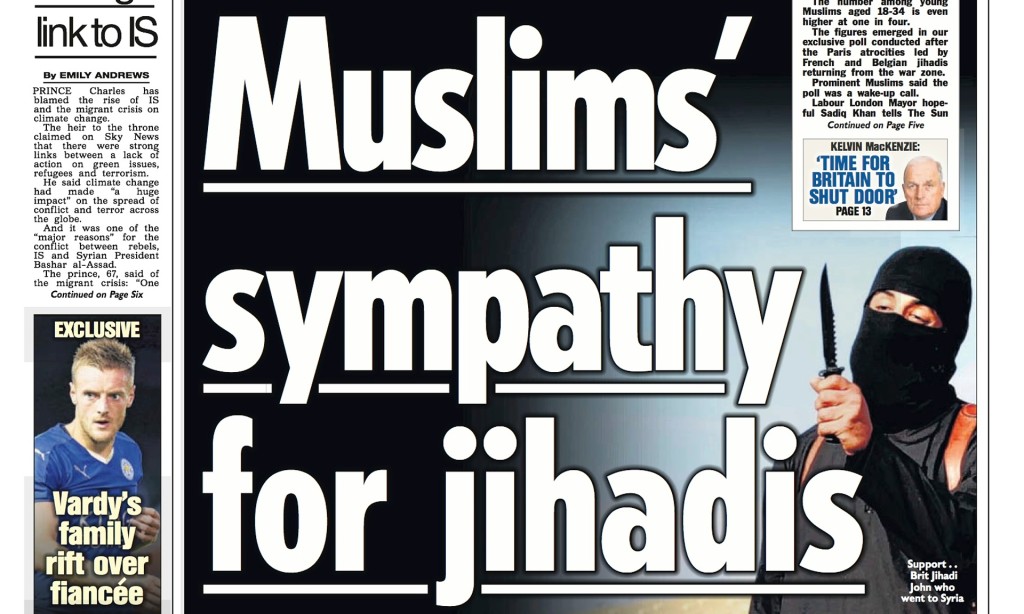 The Sun headline states: ‘Nearly one in five British Muslims has some sympathy with those who have fled the UK to fight for IS in Syria.’ But the Survation poll commissioned by the newspaper asks respondents whether they had ‘sympathy with young Muslims who leave the UK to join fighters in Syria’. Tellingly, the question asked by Survation is about foreign fighters generally, not the murderous death cult of Daesh or ISIS specifically, or indeed ‘jihadis’ in general. As we know, foreign fighters belong to various backgrounds, fighting the brutal dictatorship of Bashar al-Assad and some are supported by the UK. Nevertheless, the Muslim Council of Britain has and will continue to warn against everyone going to Syria, a view backed by more than 71% of the respondents. We question why The Sun chose instead to lead with the minority view instead, which in itself is far from clear.

The incendiary newspaper headline comes a week after the horrific attacks in Paris by Daesh terrorists, an atrocity that has been unanimously condemned by Muslims everywhere; where the majority of mosques in the UK have stood up and said unanimously ‘not in our name’; and where the Muslim Council of Britain itself took out adverts in the national press to speak out against the murders.

Dr Shuja Shafi, Secretary General of the Muslim Council of Britain said: “Many Muslims will find this poll hard to believe. The vast majority of the almost 3 million British Muslims abhor terrorism. Poll after poll attest to this, as do the many surveys showing how almost all British Muslims would report someone from the Muslim community to the police, if they knew they were planning an act of violence.”

“Of course, even one person harbouring sympathy for the Daesh death cult is one too many. Terrorism is indeed a problem and many a British Muslim parent are worried whether their children may be lured to go off to in the chaos in Syria. But dubious headlines as that printed today in The Sun does not help matters. The grand strategy of Daesh is to divide our communities and stoke fear between communities. We should not play their game.”

The Muslim Council of Britain also questions the wisdom of such polls conducted soon after atrocities. Dr Maria Sobolewska of Manchester University has studied in depth the public opinion polls of British Muslims following the 2005 bombings in London, and has asked the same questions about support for terrorism among the non-Muslim British public. Dr Sobolewska says with certainty that public opinion polls have no value for estimating the number of prospective and likely extremists and terrorists.[1]

As it stands, the figures are inconclusive at best, and further research is required to understand whether we can draw any inferences from this poll.

1. Can we ever estimate how many British Muslims will become Islamic extremists?, Mary Sobolewska, http://blog.policy.manchester.ac.uk/featured/2014/08/can-we-ever-estimate-how-many-british-muslims-will-become-islamic-extremists/

1. The Muslim Council of Britain is the UK’s largest Muslim umbrella body with over 500 affiliated national, regional and local organisations, mosques, charities and schools.

2. See our stand against terrorism: www.mcb.org.uk/againstterror