Eid Mubarak from the Muslim Council of Britain

Harun Khan,Secretary General of the Muslim Council of Britain offers his Eid al-Fitr greetings for 2017. In his Eid message he says 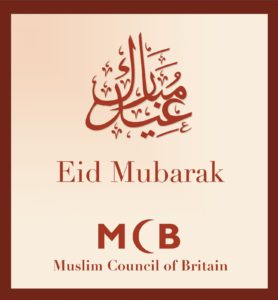 In this month, as we sought Allah’s blessings, we have also faced some serious challenges as British Muslims and, indeed, as a nation.

We have endured four terror attacks, the latest directed at Muslims themselves.

And we have witnessed tragedy at the Grenfell Tower fire, where so many people died, many of them Muslims. Inna Lillahi wa inna ilaih raajioon.

My thoughts, prayers, condolences and solidarity goes to the victims, their families and those who have supported them.

This has sadly been a month of much grieving.

But it has also been a month of hope.

I was at the Al-Manaar Muslim Cultural Heritage Centre last week, the amazing mosque, central to the emergency response to the terrible Grenfell Tower fire.

As news emerged, it was this mosque, along with churches and many Muslim charities who sprung into action and offered help when no one else could.

People from all over the country came here to donate whatever they could.

It showed the remarkable willingness of fellow Britons, Muslim and non-Muslim, to come together to help those in need.

That solidarity was displayed at the Finsbury Park attack, when so many came to offer their support and refuse to let the terrorists divide us.

Likewise, after the London Bridge and Manchester attacks, Muslims have made it abundantly clear that terrorism defies the norms of our religion.

And we have learned on several occasions how Muslims have reported suspicious activities time and again.

We need urgent action to tackle all forms of terrorism.

It means we have an honest conversation on the root causes of terrorism, and what we as communities can do to help.

It means community consent for counter-extremism, and a comprehensive review of our counter-terror strategies.

After Finsbury Park, we were grateful to see local and national government, the police and faith leaders spring into action and show solidarity towards Muslim communities.

Islamophobia has become mainstream in parts of our media and our political culture.

Our country faces some profound challenges and we face an uncertain future.

After the election, with Brexit and after the Grenfell Tower, there is an urgent need to approach our problems differently.

We need a spirit of consensus in our society.

A willingness to extend our hand across the divide.

To renew our efforts to support the most vulnerable in society.

And to find new ways to bring our societies together.

As we mark Eid al-Fitr, I pray that we can find peace in these troubled times, and we’re able to build unity across the divide.

I pray that Allah accepts all of our deeds during this Holy month.

May the peace and blessings of Allah be upon you.