Launch of the Centre for Media Monitoring

The Muslim Council of Britain (MCB) officially launched the Centre for Media Monitoring (CfMM) and its first quarterly report on the State of Media Reporting about Islam and Muslims in Parliament yesterday. The project expands the successful work that has elicited over 100 corrections on inaccurate stories in national media to a broader remit of tackling the serious problem of bias.

The CfMM’s goal is to promote fair and responsible reporting of Muslims and Islam, by engaging constructively with the media and empowering communities to make a change.

The launch in Parliament, hosted by Naz Shah MP (Shadow Minister of State for Women and Equalities), heard from a number of speakers:

Gary Jones, Editor-in-Chief of the Express acknowledged the presence of Islamophobia in the press, and praised the Centre for Media Monitoring for its report as a way of holding media to account. “We need to be monitored,” he said, whilst also noting that the Muslim Council of Britain was the first group he met with, after becoming Editor-in-Chief.

Professor Paul Baker praised the report as “impressive” because “they’re doing what we can’t”, highlighting also that the “analysis is both detailed and large-scale. And importantly, they know how to do this”.

The study of print and broadcast reports reveals a serious problem in the way that British media reports about Islam and Muslims. Examining over 10,000 articles and clips referring to Muslims and Islam in the period of Q4 2018, the key findings:

The study also looked at TV and whilst issues of accuracy and bias were found to be considerably better than the press, notable conclusions include:

The Secretary General of the MCB, Harun Khan, said: “The Centre for Media Monitoring is a huge step forward for Muslim communities, who have consistently raised concerns about the way that the media’s reporting on Muslims and Islam have affected people on the ground. We hope that this positive, constructive and evidence-based approach will make the change that we all feel is long overdue.”

The founder for the CfMM and Head of Public Affairs for the MCB, Miqdaad Versi, added: “This has been a journey – we started by focussing on inaccuracies, but the real impact is from poor journalism and bias, and the work at the Centre for Media Monitoring will bring the way issues are reported to the fore, and propose ways to make things better. Through engagement, we hope to make a real difference.”

The Director for CfMM, Rizwana Hamid, highlighted the goals of the newly formed team: “There is no doubt about the seriousness of Islamophobia within sections of British media. Even amongst the public, 58% believe the media is to blame for Islamophobia. The status quo has to change. Our goal is for there to be more responsible reporting through constructive dialogue with decision makers. A robust evidence based methodology highlighting issues of deliberate misrepresentation and unconscious bias can only help increase transparency and accountability.” 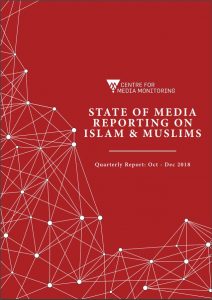 1.The Muslim Council of Britain is the UK’s largest Muslim umbrella body with over
500 affiliated national, regional and local organisations, Mosques, charities and schools.

2. See the official website for the Centre for Media Monitoring here: cfmm.org.uk