Celebrating the contributions, history and heritage of Black Muslims in Britain today

The second edition of the Proudly Muslim and Black Conference organised by the MCB in Collaboration with other Muslim communities, grassroot and national organisations was marked online this year in line with the ongoing government guidelines to tackle Covid19 Pandemic. Some of the delivery organisations for this year conference are Black Muslim Forum, Everyday Muslim, Civil Service Muslim Network, Trust Building Forum and a host of other Black Muslim Led organisations and Mosques.

This year’s PM&B Virtual Conference themed ‘Islam and Racial Justice’ saw scholars, community workers and campaigners as well as young Black Muslims across age range, even as young as age 10, talk and discuss various topic addressing issues of racial inequalities within the Muslim Community as well as the general UK society with the objective of acknowledging the age-long inequality suffered by Black African and Afro-Caribbean Communities while seeking to Foster conversations and actions to eradicate this within the Muslim Community specifically and within the UK generally.

The Conference Panelists made presentations which looked at the Islamic injunctions on race and equality of man, highlighting the significant role of Black people within Islam and the Muslim  Communities both in history and in recent times. The speakers on the first day called on all other non-black Muslims and general public to not only acknowledge the racism, descrimination and Unconscious Bias being suffered by Black Muslims especially from their fellow non-black Muslims, but to actually start addressing the issues by taking concrete actions.

Speakers call on big Muslim organisations, including the MCB to look inward and start with themselves in addressing these issues while they work with the larger community to bring about education, reorientation and appropriate change.

The second day of the conference which was youth focused, saw young black Muslims , Black Youth Workers and Community stakeholders share their lived-experiences of Racial inequility, highlight the contribution and excellent achievements of young black people as opposed to the negative stereotypes and narratives commonly found about young black Muslims within the Muslim Communities and the wider communities.

The young people shared and gave clear examples of how Unconscious Bias, Micro-Aggressions and other forms of discriminations are affecting young black Muslims in schools, Madrassa, Muslim charity sectors and other general Muslim and non-Muslim spaces that are meant to be places of refuge and common value for all, including young people regardless of their skin colours and any other differences.

The Conference also saw the soft launch of a report compiling close to 40 contributions on the Black African and Afro-Caribbean Muslim lived-experience in the UK. The MCB Secretary General speaking on the soft launch talked about the importance of engaging and understanding  the issues as well as fostering mutual understanding, adequate representations and unity.

Some Contributors to the different sections of the report gave insight into the issues covered in the report. They discussed how reports such as this can help tackle the problem of Racial inequalities as well as provide important information to stakeholders both within and outside the Muslim Communities on different aspects of life from the perspective of the Black African and Afro-Caribbean Communities. The speakers also added that this is long overdue and is only a basic starting point in the amount of work that needed to be done in this area.

It was indicated at the conference that the  report which has been worked on for about 2 years in collaboration with the Everyday Muslims and other partner organisations within the community covers sectors such as Criminal Justice, Media, Education, Arts & Heritage, Sport, Religion, Politics, Employment and the reflections on the recent Black Lives Matter campaign will be fully launched later in the year. Contributors cut across different segments of the BAACC as academics, users and professionals

It was also announced at the conference that the MCB, in collaboration with the Black Muslim Forum and other partners including the ones mentioned earlier will be launching a series of Racial Justice Workshops aimed at educating the non-Black Muslim Communities and the general public on the issues of Racial Equality. The workshop would aim at working with every sections of our society to tackle anti-blackness and bring about mutual love, respect and community cohesion.

MCB Responds to #BlackLivesMatter Protests Across the World

In May 2020, news of yet another injustice, the taking of brother George Floyd’s life, has shaken us. To his family, and the families of all whose names we don’t know, we convey our deepest condolences. Your pain is our pain.

We stand in solidarity with our Black brothers and sisters in the United States, UK and beyond, wherever anti-Black racism manifests. We recognise that anti-Black racism must be stamped out wherever it may manifest, for a failure to do so will continue to result in the taking and ruining of precious life.

Our full statement can be read here. 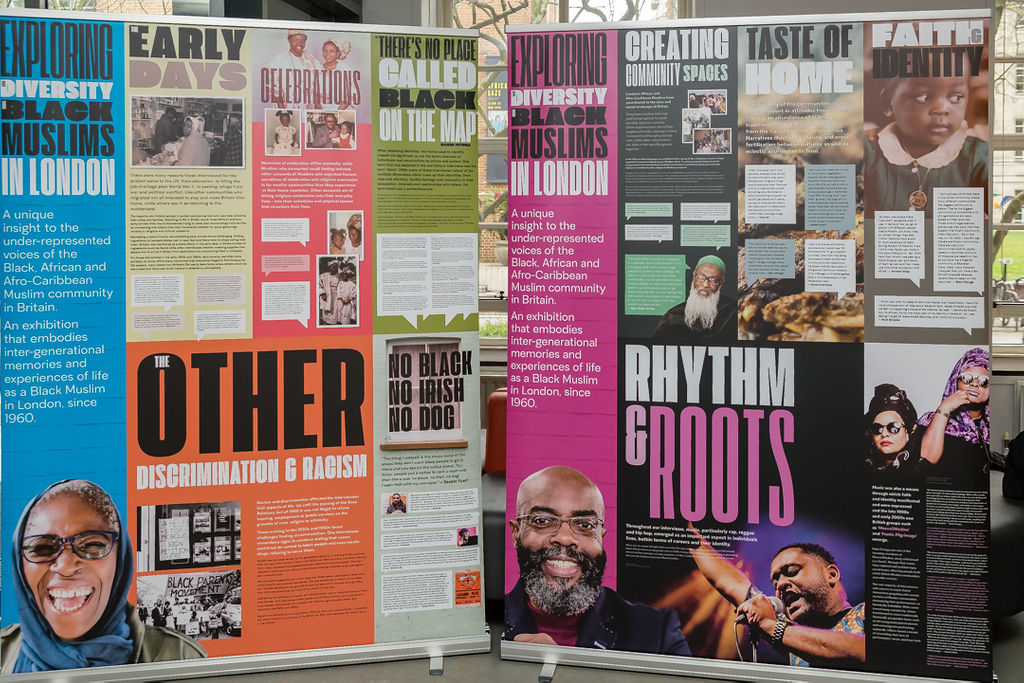 The Muslim Council of Britain, in collaboration with Everyday Muslims, SOAS and several other partners, held the first ever ‘Proudly Muslim & Black’ symposium and exhibition at SOAS, University of London on 9th February 2019. Entitled: ‘Exploring Black Muslim History and Heritage in Britain and Beyond’, the event explored issues facing Black Muslim communities in Britain, as well as highlighting important contributions made to Islamic civilization and British society by prominent Black Muslims.

The symposium brought together academics, scholars and community leaders to discuss important issues around the way Black Muslims are perceived and treated.
It included discussions on issues such as; Black Muslims and their role in Institutions and Communities, Black Muslims – Identity Formation, The role of Muslim women in African and Afro-Caribbean Communities.

The afternoon session included inspirational short talks, spoken words and poetry presentation, African and Afro-Caribbean fashion exhibition, as well as short presentations on selected African and Afro-Caribbean led Mosques and Muslim organisations in Britain today. Everyday Muslim, a heritage and historical documentation initiative, featured some of their special collections on Black Muslims culture and heritage in an exhibition at the event.

A follow-up event, Being Black, British and Muslim Today, was held at short notice in the Houses of Parliament to mark Black History Month on 29 October 2019 – click here to view the photos!

Going forth, the Muslim Council of Britain wishes to expand upon 24 months of grassroots community engagement and consultation by working in close collaboration with a range of expert stakeholders to:

It will remain our overarching aim to facilitate greater discussion and engagement between/within Black and non-Black Muslim communities, challenging anti-Black racism within British Muslim communities and fostering a greater degree of intra/inter community cohesion on an ongoing basis over the long term.

The MCB strives to act as a hub for resources and materials on this subject area and bring together academics and practitioners to highlight the key areas that need to be addressed in relation to history, social impact, youth and community cohesion. We aim to collate information through surveys, existing research and a series of focus groups, culminating in a report which details the standing and circumstance of the Black British community today. Given the current climate, we are also aiming to launch a research piece on the disproportionate impact on BAME communities by COVID 19. We hope that these research pieces will prove a useful tool for those looking to build initiatives to address the issues impacting Black British Muslims, whilst also showcasing the amazing work that is already being done and highlight the contributions.

Proudly Muslim and Black is led by a member of the MCB Executive Committee, Rashidat Adeyinka Hassan and is entirely reliant upon a small team of volunteer researchers and project assistants. We’d like to finally build our dedicated online portal of resources, hire a dedicated Project Officer to assist in the organisation and delivery of research works we’ve undertaken and organise more events and activities. 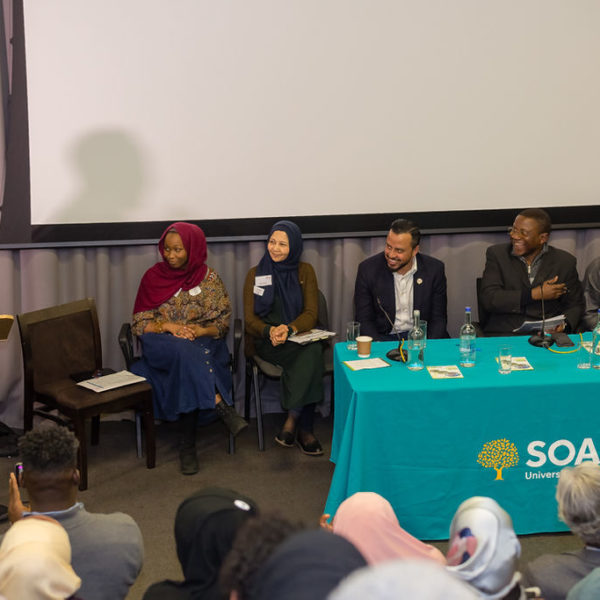 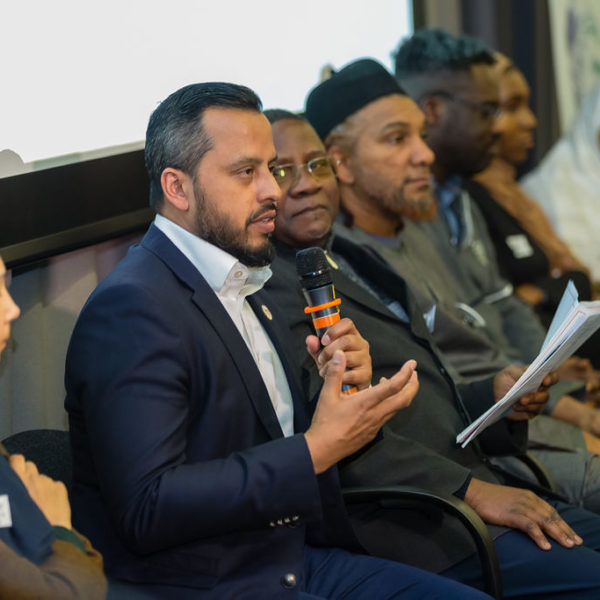 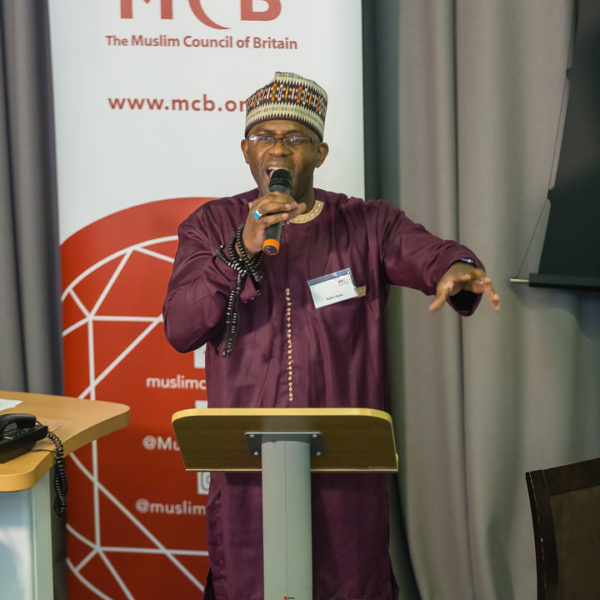 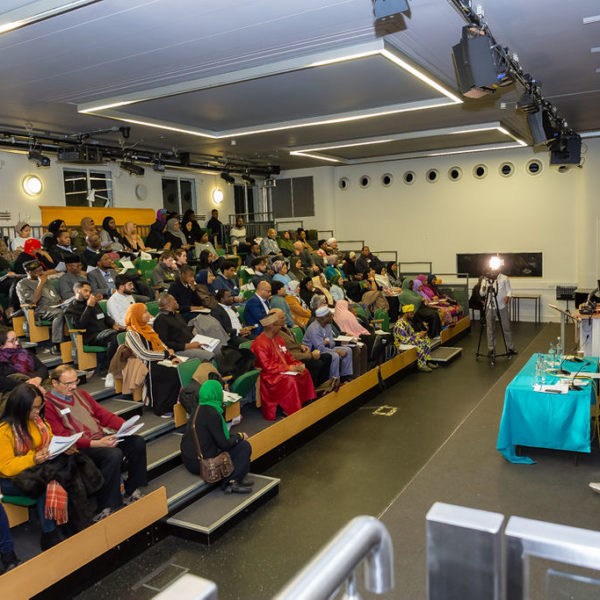 The symposium brought together academics, scholars and community leaders to discuss important issues around the way Black Muslims are perceived and treated. It included discussions on issues such as; Black Muslims and their role in Institutions and Communities, Black Muslims – Identity Formation, The role of Muslim women in African and Afro-Caribbean Communities.

The afternoon session included inspirational short talks, spoken words and poetry presentation, African and Afro-Caribbean fashion exhibition, as well as short presentations on selected African and Afro-Caribbean led Mosques and Muslim organisations in Britain today.
Everyday Muslims, a heritage and historical documentation initiative, featured some of their special collections on Black Muslims culture and heritage in an exhibition at the event.

Stay in the loop

Keep up to date with this project and others by the MCB!