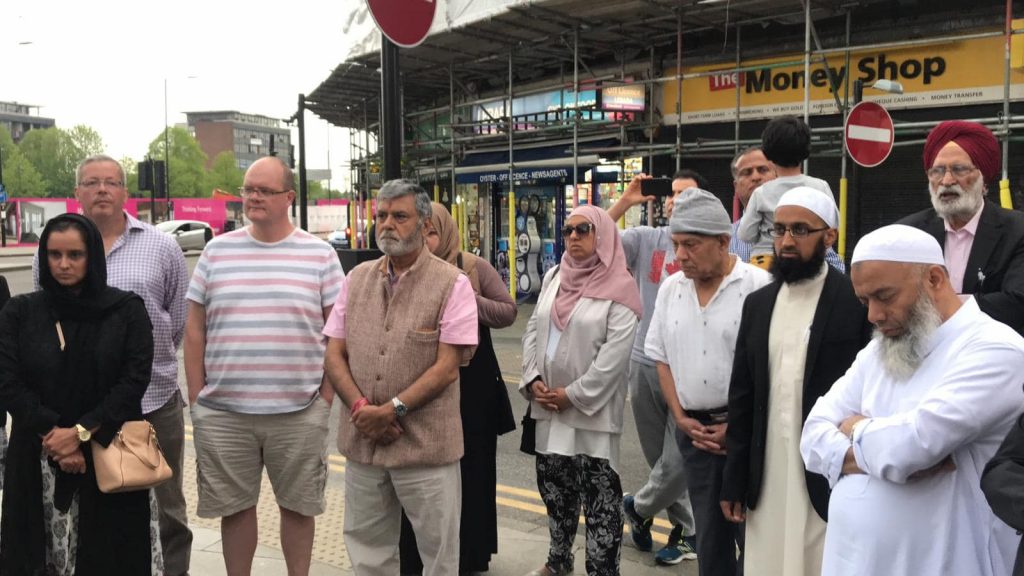 MCB has compiled a list of memorial events for the Sri Lanka Easter attacks that MCB affiliates and other Muslim organisations have been taking part in this week or scheduled to take part in, since the horrific Easter Sunday attacks on 21 April.

This page is being constantly updated. Please contact us to add any events not currently listed.

COSMOS UK invites you and your family to join this Saturday 27 April 2019 on a Solidarity Gathering in London from 10.00 am (At Old Yard, Opposite Westminster Palace) and after that leaving around 12.30 pm to Peace Walk to attend the Multi faith Vigil at West London Mission Church (Nearest Tube Station Bond Street on Central line) for prayers around 2.00 pm and finally around 3.30 pm again peace walk to Sri Lanka High Commission. Please note this is a Solidarity Gathering, Peace Walk and Multi faith Vigil to mark the remembrance of the victims of the brutal terror attacks on Easter Sunday in Sri Lanka

The event has been co-organised alongside SLMDI UK, Churches Together in Britain & Ireland and British Methodist Conference

COSMOS UK also visited the Sri Lanka High Commission in London to sign the Book of Condolences, on Behalf of Sri Lankan Muslims living in UK, and offered condolences and sympathies to all affected Sri Lankan and foreign nationals on the Easter Sunday horrible attacks

Muslim Aid , Islamic Relief and Islamic Relief Worldwide signed a joint letter with Cafod and Christian Aid and published in the The Daily Telegraph on 24th April 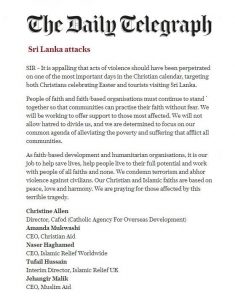 Bolton Council of Mosques alongside Bolton Faith Leaders forum and Bolton Christian, Hindu and other interfaith groups issued a joint statement and came together at in the wonderful surroundings of @StPeterBolton Bolton Parish Church, remembering those who perished, those who were injured and all affected by the Sri Lankan Bombings. 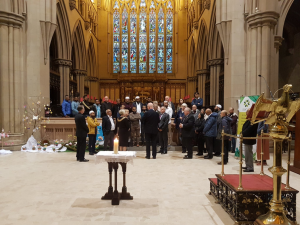 A vigil was held at the diocese of Leicester at Leicester Cathedral on Thursday 25 April at 5.30pm joined by members of Leicester Muslim communities.

In addition, more than 100 people, from the Hindu, Bhuddist, Muslim and Christian communities of Leicester, walked from Abbey Park to the Clock Tower today in a silent March. 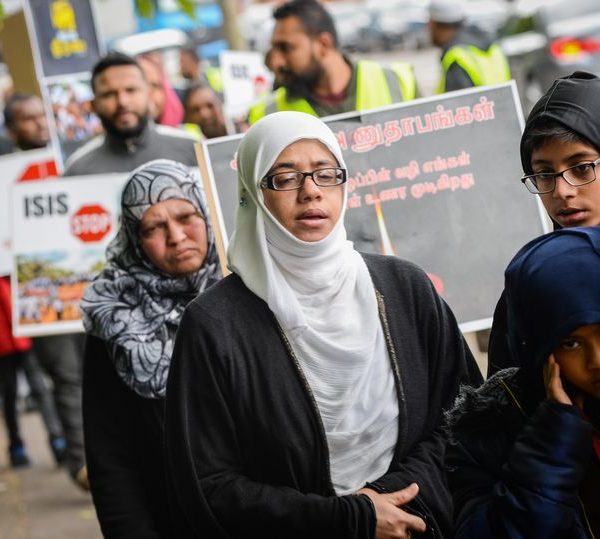 A time to pray and remember all who were killed and injured, all waiting for news or sitting by the bedside of a loved one. #PrayForSriLanka

Manchester Cathedral,
Victoria Street,
Manchester M3 1SX
Sunday 28 April at 7.00 pm
A time to pray and remember all who were killed and injured, all waiting for news or sitting at the bedside of a loved one.
There will be time for reflection, the sharing of a minute’s silence together, prayer, the lighting of candles, and words from representatives of the region’s faith communities. There will also be a Book of Condolence open for you to write in.
#PrayforSriLanka
Manchester
On Sunday 28 April, Muslims, Catholics and Buddhists – many from Sri Lanka – joined for a show of solidarity at St Bernadette’s Catholic church in Withington
On Sunday 29 April, members of Cheadle Mosque Association (CMA) visited their friends in the local Christian community to show solidarity:

A week after the horrific attacks that took place in #SriLanka, members of Cheadle Mosque came together with their Christian friends to share their grief and offer solidarity. Faith communities stand together in mutual respect and harmony, such hatred will never divide us. #faith pic.twitter.com/bHD0bAQ0kN

Senior staff, teachers and students from the Bahu Trust and the Birmingham Quran Academy visted our local churches with flowers & messages of sympathy, unity and solidarity

We have a special bond and friendship with our neighbourly church friends which will continue to flourish pic.twitter.com/FPc03Wb0I0

Communities coming together for Sri Lanka vigil in Southampton

The Southampton Council of Faiths and the Muslim Council have created the vigil which will be held at the Peace Fountain in the city’s East Park .

And Southampton Medina Masjid came together the same day to show solidarity.

York Mosque & Islamic Centre joined a service at York Minster on 24 February and the Imam gave a prayer and message of solidarity with their Christian neighbours.

A vigil for Sri Lanka was held in Bradford City Centre on 23rd April 5pm, to commemorate the victims of the terrorist attacks which killed over 300 people there on Easter Sunday. The vigil, which is open to all, will be held in Centenary Square and led by The Very Reverend Jerry Lepine, Dean of Bradford Cathedral. It will also be attended by Councillor Zafar Ali, the Lord Mayor of Bradford; Believing in Bradford Ambassadors and other faith leaders. 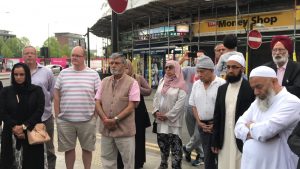 Didsbury Mosque are asking for our community to  stand outside 1 of the following churches this coming Sunday 28th April 2019.

The churches and times are as follows:

This is to offer those Christians the same humanity that was extended to us and to show we stand united and hate cannot divide us.

Please let us know which church you will attending by messaging Sister Jamila on 07464602434.

When New Zealand suffered that barbaric act in the Masjid and many died and many were injured, we as Muslims were overwhelmed with the amount of support we received from various communties. We saw thousands stand together in solidarity with us against the far right attack. Our mosques, in various parts of the world, saw Christians, Jews, Sikhs, Hindus, etc stand outside mosques offering protection and in solidarity with us as humans. Sri Lanka suffered an appalling attack on Easter Sunday. Churches were attacked while their congregation was in worship, just as those in New Zealand were.

The Anglican/Muslim Forum of Lancashire, which seeks to promote understanding and respect between Muslims and Christians in the county, condemned the atrocity and called for all faiths to unite in rejecting extremism

A vigil was also held on Tuesday 23 April, 6pm, in Flag Market in Preston.

Service for Sri Lanka terrorist attack victims to be held in Dundee.

Officials at a Birmingham mosque have spoken out over the Sri Lanka Easter bombings. Green Lane Mosque & Community Centre (GLMCC) – one of the key organisers of the Eid celebrations that have become the largest in Europe – say they are “saddened and shocked” by the attacks on churches and hotels in Sri Lanka on Easter Sunday, April 21.

Members of Barking and Dagenham’s diverse Christian communities joined their Muslim colleagues for a freshly cooked meal at Al Madina Mosque on the evening of Thursday 2 May. The occasion remembered the heavy human cost which comes from a lack of tolerance and a failure to understand each other. Bishop Trevor Mwamba thanked the mosque and the Muslim community for standing side by side with their Christian brothers and sisters at a time when many throughout the world were hurting following attacks on places of worship including mosques, synagogues and churches. About 40 people then enjoyed a sumptuous home cooked meal and took part in healthy and fun filled conversations 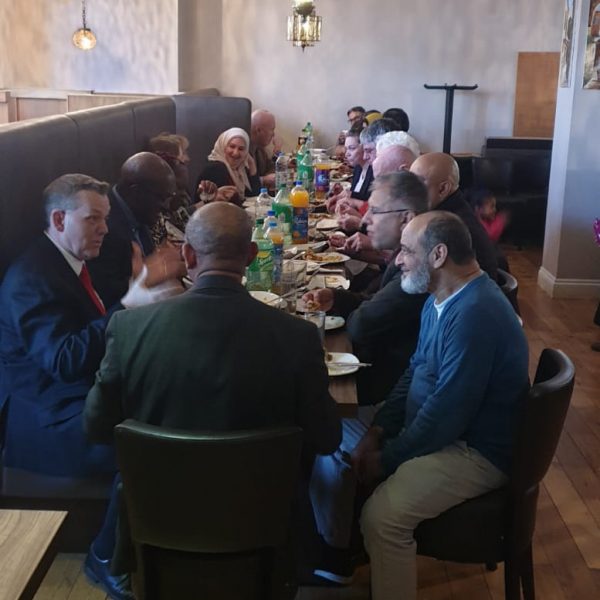 A multi-faith vigil will be held in Ilford town centre tonight to remember the hundreds of people killed in a series of bombings in Sri Lanka on Easter Sunday.

This page is being constantly updated. Please contact us to add any events not currently listed.