2020 marks the 25th anniversary of the Srebrenica genocide, the most greusome tragedy to occur within Europe since the Second World War. Over 8,000 Muslim Bosniak men and boys were slaughtered due to their faith, by units of the Bosnian Serb Army of Republika Srpska.

Of the mass graves that were made, new remains are still being found to this day, and on the 11th of July every year, an honorary burial is held at Potocari Memorial Centre in Srebrenica.

East London Mosque and London Muslim Centre with Bosnia Heritage Foundation, will be hosting a live commemoration via Zoom for the 25th anniversary of the Srebrenica genocide. The commemoration will be held on Wednesday the 15th of July, from 6:00 pm to 7:30 pm (BST/UK). Speakers include: 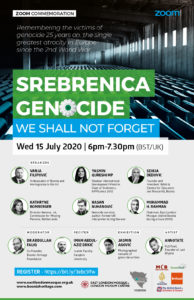