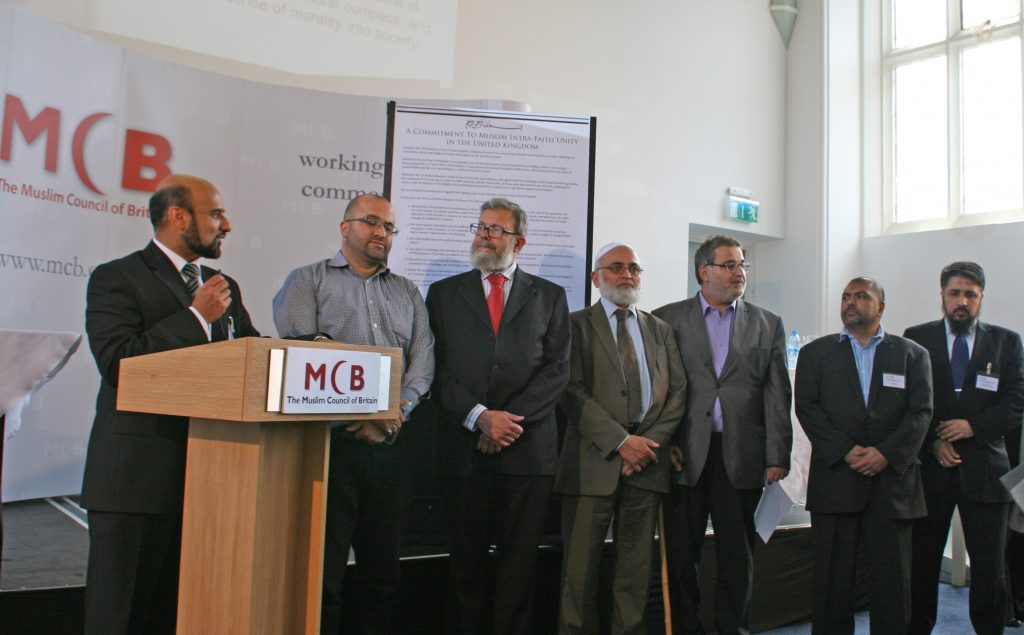 British Muslims from a diverse range of faith traditions came together today to affirm their commitment to Muslim unity and pluralism. A historic document was signed by leaders and representatives of a number of organisations from a cross section of Britain’s Muslim community. At a time of deepening sectarian tension in the Middle East and Muslim world, this document has been drawn up to warn and ward off any threat to cross-sectarian unity in the United Kingdom. With Britain possessing  one of the most diverse Muslim communities on earth, this document is intended to provide an initial framework for respect, dialogue and cooperation amongst Britain’s Muslims.

The full statement can be found below, with the name of the initial signatories. We hope this list will grow as time progresses.

A Commitment To Muslim Intra-Faith Unity in the United Kingdom
WHERAS WE, the Muslims of the United Kingdom, comprise of one of the most diverse Muslim communities on earth: reflecting the rich diverse ethnic and religious mosaic that makes up the Muslim Ummah.

WHEREAS the promise of transition in the Middle East and Muslim world is now threatened by instability, which is increasingly being expressed as a ‘Sunni-Shia’ confrontation. It exacerbates the limited theological differences, while ignoring the vast areas of commonality and the core foundations on which all Muslims stand.

WHEREAS WE, as British Muslims, strive to live in harmony and cohesion, and agree that the challenges of the future should supersede the problems of the past, we are keen to offer any help and join hands with all those who wish well for our Ummah, stopping this vicious cycle of violence in the Middle-East and Muslim world which is abhorrent to all Islamic values and principles.

WE are resolved to prevent this tragedy from spilling over to our Muslim society in the United Kingdom.

To this end, we call on all British Muslims to honour the following code:

1. We believe in the oneness and supremacy of Allah, in Muhammad (peace be upon him) as the seal of the prophets and the last receiver of a divine scripture, and in the viability and authenticity of the Glorious Quran, and who faces the qibla (direction of the Ka’bah) in prayers. As such no group or individual shall use, propagate or tolerate the rhetoric of takfir (charge of unbelief) for anyone.

2. We shall respect each other and our differences and be sensitive to the personalities, places and events that any group amongst us hold in esteem. In our respective disagreements, we shall abide by the Islamic manner (adab) of disagreement that is neither inflammatory nor insulting.

3. We shall avoid hate and condescending speech and literature in our midst and join to condemn violent rhetoric by reasonable means.

5. We call on our Ulama from all traditions to form a positive space for reconciliation and cooperation. The forum will facilitate responses that challenge our intra-faith unity.

6. While the precarious international situation will no doubt heighten our concern and activism, we are resolved to campaign in an inclusive, non-sectarian manner.

7. Above all, we shall emphasise areas of commonality, the virtue of compassion and empathy and the awareness that Allah is closer to us than our heart and veins and He the Almighty is recording our thoughts and intentions, as well as our words and deeds.

Initial main partners who signed at the Muslim Council of Britain’s 16th Annual General Meeting. Delegates also signed, and more will be lending their names. If you would like to add your name and your organisation, please email:[email protected]

Farooq Murad, Secretary General of the Muslim Council of Britain