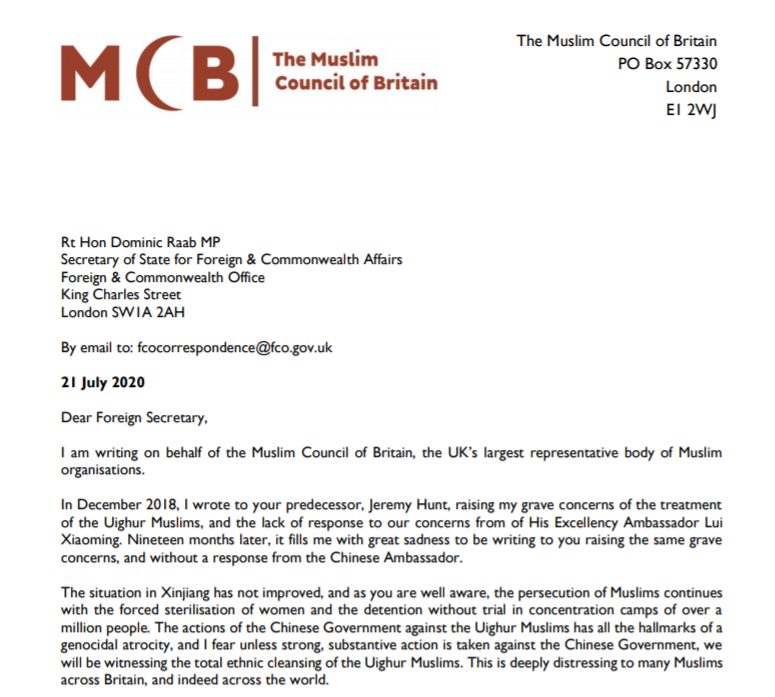 The Muslim Council of Britain has called on the Foreign Secretary, Rt Hon Dominic Raab MP, to follow up his strong stance condemning the ethnic cleansing of Uighur Muslims “with equally strong actions”.

In a letter on Tuesday 21 July, the MCB welcomed the criticisms levelled at the Chinese Government by the Prime Minister over its flagrant human rights abuses against Uighur Muslims but expressed concern that without a tangible action plan to address the atrocities committed, the abuses will not stop, and more lives will be lost.

The Uighur Muslims are facing the harshest manifestation of Islamophobia at the hands of the Chinese Government with the forced sterilisation of women and the detention without trial in concentration camps of over a million people.

“The MCB has consistently been calling on the UK Government and politicians to take action against the Chinese Government over the ethnic cleansing of Uighur Muslims. The situation in East Turkestan is deeply harrowing, from the forced sterilisation of women to the detention without trial in concentration camps of over a million people.

“Human rights must be at the forefront of our foreign policy. At the 2019 general election, the MCB called upon all political parties to stand up against the Chinese Government in support of the Uighur Muslims.

“The UK Government must now match its strong stance with equally strong actions. Sanctions against China must be imposed, and strong diplomatic power used before Uighur Muslims are subject to total destruction at the hands of the Chinese Government.”